Worn Out From Playing Tourist With Latest Guests

Monday night my next round of guests arrived.  Sally and Gary stopped by on their way back to Florida from visiting family in New Jersey.  We headed over to Shirlington Village and the Thai place there for dinner.  The Pad Thai was awesome, but the chicken was only so-so.  So next time, shrimp it is. 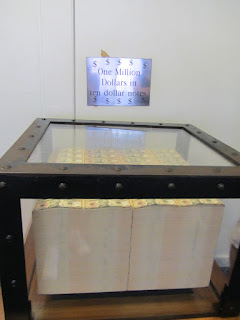 Yesterday we started the day at the Bureau of Engraving and Printing.  It's been on my list to visit for a very long time, and I'm so glad I finally made it!  From there we went to the Holocaust Museum next door.  Then it was off to the Museum of the American Indian for a late lunch.  One buffalo chili taco later and I was ready for a nap.  Gary and Sally wanted to watch one of the films, but we ended up leaving before it was over.  I think we were all pretty much wiped by then and ready to head home, which we did.  We stopped by the Crystal City farmer's market and I picked up a Rockahock Farms Blackberry Crisp.  I had picked up the American version of The Girl With the Dragon Tattoo movie at the library and we watched it after we got home.  We all really enjoyed it.  Watching it made me want to read the books again, but that may have to wait for a while.  I have too many library books that I need to work my way through first.  I just recently got hooked on Donna Andrews Meg Langslow mysteries, and I checked out A Discovery of Witches by Deborah Harkness to re-read before the release of book two in the All Souls Trilogy, Shadow of Night, next month.  What a delimna to have so many books to choose from to read next!

Today we headed back into DC and got tickets for the Old Town Trolley, a hop on hop off tour trolley.  We visited Arlington Cemetery and the Old Post Office Tower.  You can't really beat the views from the clock tower, especially since the Washington Monument has been closed to visitors since the earthquake last year.  I hope it is opened back up while I'm still living in Arlington.

Gary and Sally are watching another movie now (Heat), but I really wasn't in the mood to watch it.  So I finished the first Meg Langston mystery by Donna Andrews (Murder with Peacocks), and am now puttering on the computer.  The next book in the series is Murder with Puffins, I think.  I noticed a trend in the naming of the books...they all reference a type of bird!  The last few years I've really become quite intrigued with birds.  I saw a bunch of blue jays when Jim and I visited the Arlington Cemetery the weekend before last. 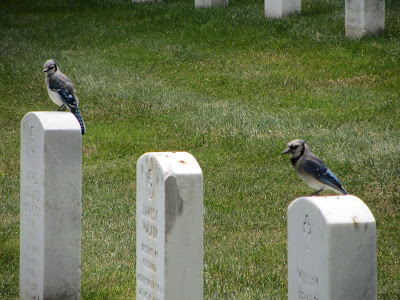 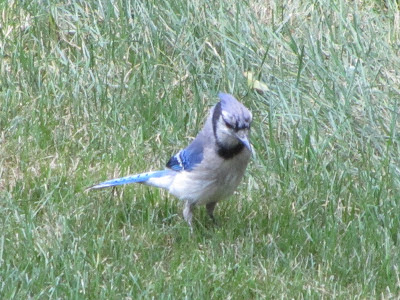