On Friday, we arrived in Ketchikan.  Neither Sandra nor I signed up for any shore excursions here, so we headed for the visitor’s center as soon as we got off the ship to get a map of the town so we could explore.  We visited Creek Street and walked across a bridge over water where in the right season, you can see salmon.  Unfortunately, we were there a bit too early to see the salmon run. 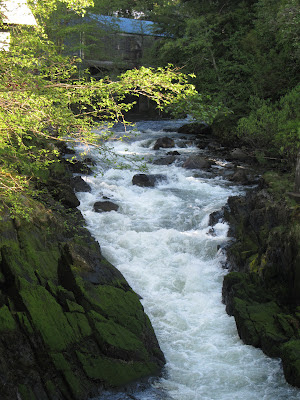 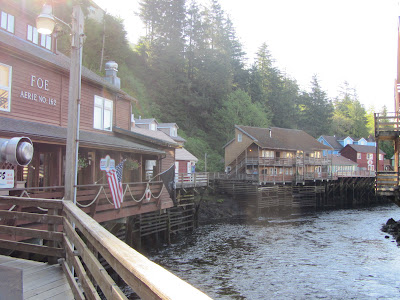 We went into quite a few of the galleries and shops along Creek Street, and explored up and down alleyways.  We met a nice man and his well-trained dog, Sid.  The man was sitting inside a café and Sid was sitting outside staring at him through the window waiting on him to come out.  When the man came out, we started chatting with him, and learned he and Sid lived on a boat in the harbor.  Sid was some type of Australian shepherd, and man was he smart.  Sid walked without a leash; although the man had one handy just in case someone made a big issue out of the fact that he wasn’t on a leash.  He was one extremely well-behaved dog!


We rode the free bus to a small city park.  There were quite a few totem poles scattered throughout the town, including near the park.  There were places we could have visited outside of town with more totem poles, but after visiting Sitka the previous day, Sandra said she had seen enough, and had I.  Overall, we thought Ketchikan seemed very touristy, and it was probably my least favorite stop on the trip.