I recently returned from a visit to Seattle that included a 7-day Alaska inside passage cruise.  I haven't made the time to write about my trip yet.  This is the first of several posts I plan to write about the adventures I had during my trip.

I left my apartment at 4:30 am on the Friday morning of May 18th.  I was so excited my vacation had arrived, that the lack of sleep didn't hit me till later in the week!  I flew out of Reagan International Airport and had a 2 1/2 hour layover in Milwaukee.  I used the time to do some reading for my USF class and listened to music using Pandora on my iPhone.  I had just discovered Pandora the night before I left on my trip.  I finally arrived in Seattle about 1 pm and met my friend Sandra, who had flown in from Tampa and arrived about an hour before me.  We caught a shuttle to our hotel in downtown Seattle and checked in.  Then it was time to go exploring!

We decided to head to Pike Place Market first.  The vegetables and the flowers were a riot of colors! 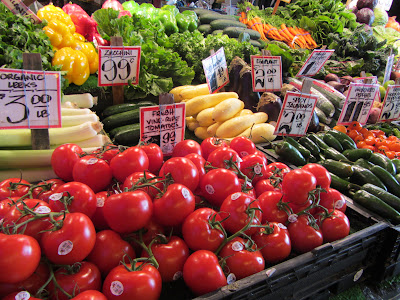 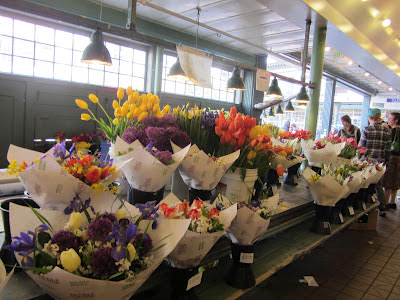 It was fun to stroll through the stalls and wander down the nearby alleys of shops.  We had sandwiches for lunch at Three Girls Bakery and continued exploring.  Many of the produce stalls were giving bite size samples.  We ended up getting an Oh My God pear that was so juicy and delicious that when you bit into it, you really did think "Oh My God" this is GOOOOD!  After a few small purchases, we headed back to our hotel room to drop our bags, then headed to the Seattle Art Musuem (SAM) Downtown.  There is a 48-foot hammering man out front, so you definitely can't miss the building.  The hammer actually moves up and down! 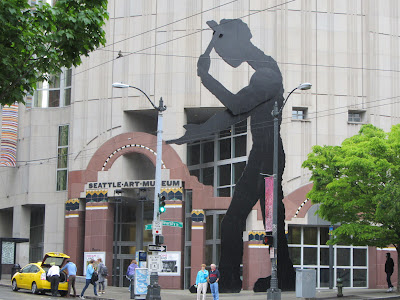 They have art work from all over the world and after spending several hours there, we were exhausted.  I learned a lot about Northwest Native Americans and their culture, and ended up doing my first museum visit report for my current USF class on my visit there (15 out of 15 possible points for the report!).  By that time we finished at the museum, we decided to call it a day.  After all, our bodies were still on east coast time!
Labels: vacation; Seattle