Today is my birthday, and it has been an absolutely fabulous day!  Yesterday I received not one, not two, but three packages!  I had been given instructions to open the one from my aunt and uncle as soon as it arrived because it contained edible goodies!  I didn't have to be told twice!  I opened the one package, which actually contained a card, two containers of my favorite homemade cookies (wedding cookies and no bake cookies!), and four individiually wrapped presents!  I decided to save the individually wrapped presents until today since today is my actual birthday, but all bets were off with the cookies.  I was nibbling on them pretty much as they came out of the box!

Today after I got home from work (more about that later!), I ensconsed myself on a stool at the kitchen island with scissors in hand and starting opening presents!  Dublin was a big help of course!


I'm not sure how mom and Sid managed to do it, but they sent me two blown up ballons that actually made it in tact!  I received two bird books that will hopefully help me figure out what kind of birds are eating from the birdfeeder.  And a Coach iPad case!  When I read the bookmarks my aunt and uncle sent me, I almost fell off the stool I was sitting on because I was laughing so hard!  I especially like the one with the cows.  I am an avid reader, and a day for me doesn't seem complete if I don't start it off with a big glass of skim milk!  That bookmark fits me to a tee! 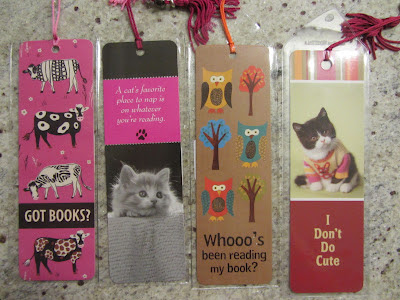 Today I also received several birthday cards in the mail, and many birthday greeetings on Facebook.  I am truly blessed to have such wonderful family and friends.  I miss my friends from Tampa something fierce.  That is the one main drawback of my move to the D.C. area.  Alexia, my friend, I miss you more than words can say.  Thank goodness for phones, texts, and Facebook.  They make me feel not quite so far away.


Fortunately, there is much to see and do living in Arlington.  This entire week has been a really good one.  I've been in a Congressional Operations Seminar all week.  The majority of our class time has been spent in the Rayburn House Office Building just sound of the U.S. Capitol.  I've been getting there early enough to spend some time hanging out in the mornings in a small park just behind the U.S. Botanic Gardens and next to the Rayburn Building where my class is being held.  It has been very peaceful and therapeutic (the park, not the class!).  We've had speakers from all walks of Washington life, including a Congressman, a radio man, a Congressional staffer, a lobbyest, and a political analyst.  Tuesday afternoon I visited the Senate gallery and observed a vote being taken.  Yesterday afternoon and this morning we had time to visit committee hearings in both the House and Senate buildings.  The week has been both educational and entertaining.  What a great birthday week this has turned out to be!
Labels: birthday