On Wednesday we arrived early to Juneau.  It was foggy and rainy when we docked.  I had a shore excursion planned for the afternoon, so Sandra and I planned to explore the town that morning.  As soon as you hit the dock, there are all kinds of people offering various shore excursions.  We decided to take a van tour that was scheduled to have us back in time for me to catch my afternoon shore excursion.  We had less than half an hour to kill before getting on the van, so we window shopped.


There were 4 others on the tour with us.  We had a very nice guide who shared a wealth of knowledge with us.  As we left Juneau, we drove by a field where there were bald eagles out the wazoo.  Our guide told us bald eagles in Alaska were like pigeons elsewhere.  It was amazing to see so many in one place.

We visited one side of a lake where we could see Mendenhall Glacier across the lake.  It was very peaceful without many people there.  We drove across a bridge to Douglas Island and went to a nice viewing spot to see Juneau across the channel. 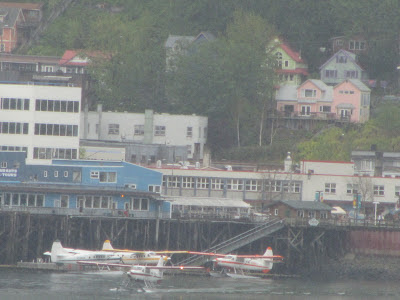 But the highlight of the tour was visiting the Shrine of St. Therese.  There is a short causeway you walk across to reach a small, beautiful chapel.  From the shore, we saw several killer whales, something that I think was a seal (!?), and we met the neighborhood cat.  There is a lodge and several cabins on the property that can be rented.  It’s a perfect retreat to get away from it all and just enjoy nature.  We saw a bald eagle and several other types of birds.  I would have enjoyed staying longer and exploring the island where the chapel was a bit more.


But all too soon it was time to head back, and I had a whale-watching tour scheduled for the afternoon!  Back at the dock, I boarded a bus with the others that had signed up for the tour.  We met our guide, Jenny, and traveled to a nearby marina, where we boarded a boat to head out on the water.  The boat was really cool.  It was fully enclosed, but the windows on the sides could be raised up so you could get an unobstructed view.  Soon we were off to look for whales!  As we were leaving the marina, we saw a harbor seal checking us out.  Almost as soon as we got away from the marina, we saw our first whales, several killer whales (or orcas), like I’d seen earlier from the shore.  But this time we were much closer.  Regulations say you boats have to stay at least 100 yards away from any whales they spot.  But if the boat is stopped and the whale approaches you……! 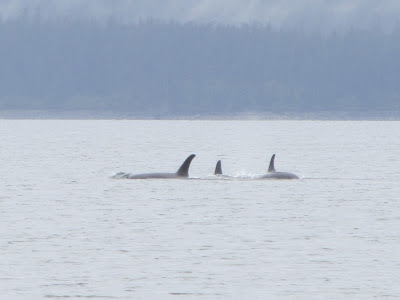 ﻿ We watched the orcas for a while.  Soon another boat arrived, so we headed off to look for humpback whales.  And we soon found some!  Not only humpbacks, but seals were all over the place too!  It was awesome!  I could have stayed on the water all afternoon looking for marine critters and trying to get that elusive whale tail picture, but alas, we had a ship to catch before it set sail without us.  As we were starting to head back to shore, one enthusiastic harbor seal was leaping out of the water in our wake. I tried to get a good picture, but this is the best I could get!

Once we got back to shore, we headed off to Mendenhall Glacier.  We parked in a parking lot where there was this huge pile of snow.  Jenny told us that's where the snow that's collected from the streets is dumped.  Every year the residents bet on the date when the snow will be melted by.  She said the previous year, the pile never melted all the way! 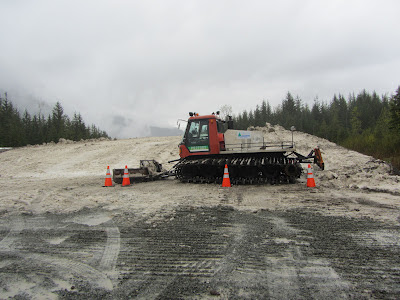 We then walked about a mile through the rain forest and learned how it was formed as glaciers receded in the past.  Then we arrived at the opposite side of the lake where Sandra and I had been in the morning, where there was an even better view of Mendenhall Glacier! 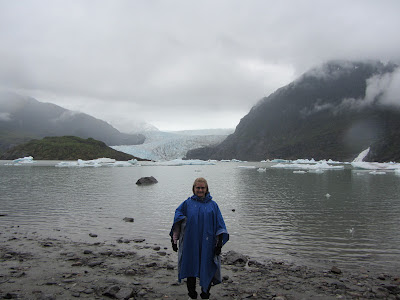 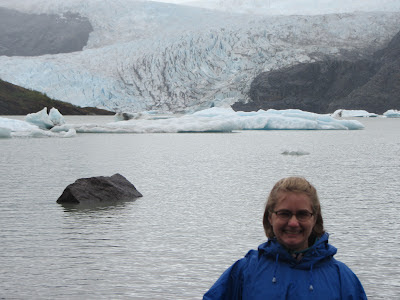 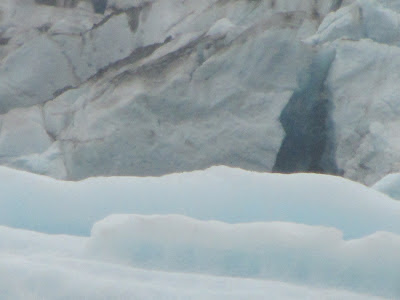