Saturday morning Sandra and I were up bright and early, ready to continue our exploring.  We decided to head to the area of downtown known as Pioneer Square.  It was fun walking the streets, although it was so early, there wasn't much open at the time.  We had my Frommer's Seattle Day By Day book with us, and followed the it's walking tour of the area.  We discovered Waterfall Garden Park, which was built in honor of UPS employees (no, that wasn't a typo, I was hanging out in a park built for the competition's employees, but hey, when in Rome...!)  We walked by the Seattle Mystery Bookshop, but unfortunately it wasn't open either.  I drooled over the books in the window for a bit, then we moved on.

From Pioneer Square, we decided to catch the local bus to Volunteer Park, which is in the Capitol Hill neighborhood.  We had heard that the view from the water town in the park was as good as the view from the Space Needle.  The park was gorgeous!  It had a conservatory filled with all kinds of interesting plants, including cacti and orchids.

And the view was indeed awesome!  After leaving Volunteer Park, we explored the Capitol Hill neighborhood and vistied the Elliott Bay Book Company, which is touted in my Frommer's book as the city's favorite bookstore.  It is over 20,000 square feet, and I found it a bit overwhelming. 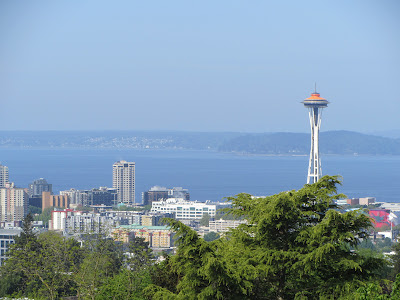 We rode the bus back into downtown proper and went to the Seattle Center, where the Space Needle is located.  We decided not to go up in the Needle.  The lines were long, Sandra had been there before, and after seeing the views from Volunteer Park, I was OK with not going up in it.  We explored Seattle Center and I saw a glass sculpture that immediately reminded me of Dale Chihuly, an artist who works in glass.  A museum of his work opened in St Petersburg not too long before I moved from the Tampa area and my family and I visited the it last June.  It turns out the brand new Chihuly Garden and Glass was scheduled to open the day after we set sail on our cruise.  AARRRGH!  All we could do was peer through the fence to catch a glimpse of several of the outdoor sculptures.

﻿
From Seattle Center we walked UP the hill to the Queen Anne neighborhood.  Near the top of the hill was a small park with another awesome view of the city skyline.

Sandra and I then decided to head for the Chinatown area, and as luck would have it, our route took us back through Pioneer Square, so I sweet-talked Sandra into stopping by the Seattle Mystery Bookstore on our way back through.  Now THAT ended up being the bookstore that resonated with me!  I started talking authors with a lady that works there.  After telling her how much I enjoyed Val McDermid and Jo Nesbo, she recommended several other non-American authors for me to try.  The next thing you know, Sandra is caught up in the mood, and ready to buy a book to try too!  The desire and love to read can indeed be infectious!

﻿
We followed the walking tour through the Chinatown/International District, and were a bit disappointed by how run down it appeared to be.  It was rather sad.  The major highlight from that area was a stop at the Uwajimaya grocery store, where Sandra was able to find Pocky sticks, which are biscuit sticks coated with chocolate.  She remembered them from when she lived in Japan as a kid.  There were definitely yummy!