• Grab your current read• Open to a random page• Share two (2) “teaser” sentences from somewhere on that page• BE CAREFUL NOT TO INCLUDE SPOILERS! (make sure that what you share doesn’t give too much away! You don’t want to ruin the book for others!)• Share the title & author, too, so that other TT participants can add the book to their TBR Lists if they like your teasers.
My teaser for today:
"The pain of loss surged up inside him like a wave; he tightened his fist, and Hugo, wings fluttering, pecked angrily at his fingers, drawing blood.  Opening his hand, Hodge released the bird, who circled his head as he flew up to the skylight and then vanished."

p. 81, "City of Bones" by Cassandra Clare
I recently watched the premiere of a new television show called The Shadowhunters.  It turns out it is based on a book series by Cassandra Clare.  And if you haven't picked up on a trend with me yet, you will if you continue to read this blog!  I tend to be drawn to books that have been made into either TV shows or movies that I either like or an intrigued by.  So I'm currently reading the first in Cassandra Clare's The Mortal Instruments series, City of Bones. 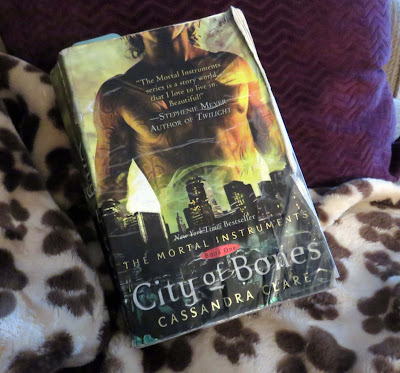