• Grab your current read• Open to a random page• Share two (2) “teaser” sentences from somewhere on that page• BE CAREFUL NOT TO INCLUDE SPOILERS! (make sure that what you share doesn’t give too much away! You don’t want to ruin the book for others!)• Share the title & author, too, so that other TT participants can add the book to their TBR Lists if they like your teasers.
My teaser for today:
"And if, alone in her narrow bed at night, so forlorn she could almost hear her soul shriveling away, she were to wonder and worry why there wasn't more to life...well. that was human nature, wasn't it?  To want the impossible, though the sum of her experiences proved that happiness was rare, elusive, and above all, ephemeral."

p. 9, "After the War is Over' by Jennifer Robson
I previously read Robson's first novel, Somewhere in France, that I really enjoyed; so when I learned she had written this second novel, I immediately put it on hold at my local library.  The setting for Chapter 1 is Liverpool, England in March 1919.  My thoughts can't help but turn to Downton Abbey, the PBS show that I absolutely love.  The current, and last, season of the show is set in the 1920s.  I have high hopes for this book by Robson. 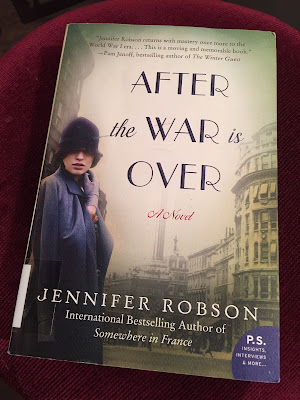 Robson's third novel, Moonlight Over Paris, is set to be released next week on January 19th. You can bet I'll be putting this one on hold too!
Labels: Teaser Tuesday