This past Saturday I decided to visit DuPont State Forest, which is less than an hour outside of Asheville.  Kristen from the Asheville Newcomers Club had mentioned it to me on one of the hikes we were on.  She said a lot of the outdoor scenes from the movie The Hunger Games were filmed there.

When I first got there, I picked up a trail map from the visitor's center.  And I'm sure glad I did, cause I used it more than once while on the hike!  A nice man at the center recommended a route that would take me past three of the waterfalls within the forest.

I started out heading for the first of the three waterfalls that was furthest from the visitor's center and parking area.  It was a bit drizzly out, and I had the road practically to myself.  As I began my hike, not too far from the parking lot I discovered a really cool covered bridge. 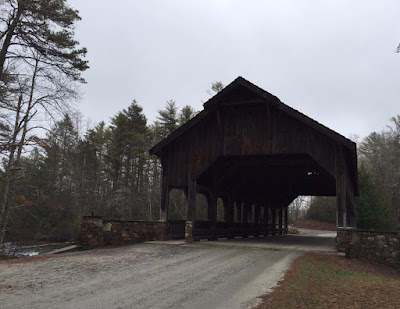 As I continued down the path, I crossed another short bridge over the Lake Julie Spillway.  The sound of the water was very soothing. 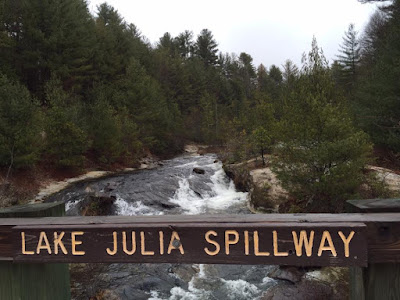 After making a wrong decision or two direction-wise and consulting the trail map several times, I finally made it to Bridal Veil Falls.  I put the Joby Gorilla pod and remote I have for the iPhone to good use and took a photo of me with the falls in the background!  It took several tries, but I finally got both me and the falls in the pic! 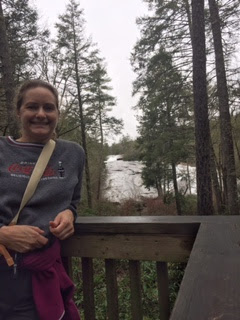 After leaving the falls, I retraced my steps back to a trail that branched off the main road that had been recommended me to, Triple Lakes Trail.  It took me through a really neat wooded trail and by, you guessed it, three lakes! 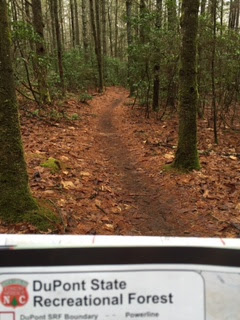 As I walked by the last of the three lakes, I stopped to enjoy the view across the lake.  I later learned the mountain I saw in the background was Joanna Mountain.  There were a few ducks on the lake, and I saw one mountain biker in the distance as I passed the lake, but other than that, I was on my own.  The walk through the woods was both peaceful, and a little spooky. I couldn't help but wonder if there were any bears in the forest, and what would I do if I encountered one.  I did some digging later and read that if you encounter a bear, it's best to make a lot of noise and NOT to run!  I hope I never have to put that to the test! 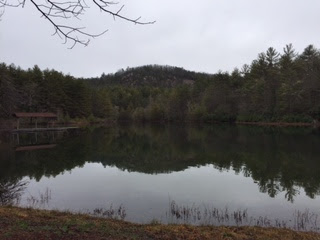 The Triple Lakes Trail dropped me back out on the main road that I had hiked to get to Bridal Veil Falls.  I followed it back to a trail that branched off to High Falls.  It turned out the covered bridge I crossed earlier is at the top of High Falls.  If you look closely, you can see it in this photo of the falls. 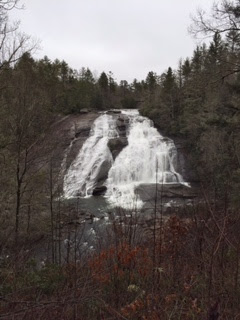 Here I am standing on the covered bridge at the top of the falls! 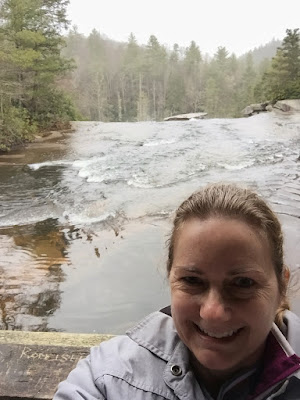 The trail to High Falls took me to the trail to Triple Falls.  I used the Inmacus wide angle lens I have for my iPhone to take this photo.  (For a photo with all three of the falls, see the sister post of the mini-me's, who accompanied me on the hike.) 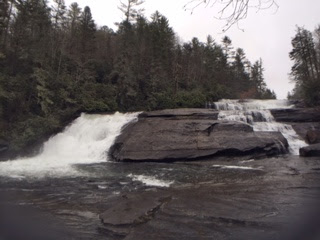 I've never taken very many selfies cause I typically don't like the way I look in them.  But I figured it's time to get over that and took quite of few selfies on this hike.  Here I am with the upper falls and then again with the lower falls. 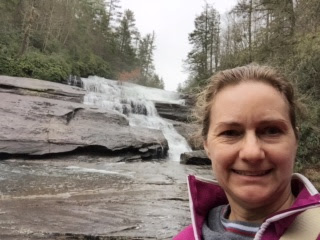 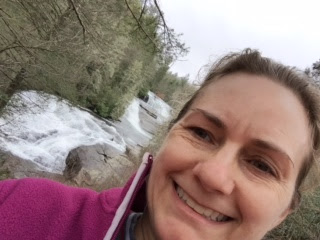 Now that I've seen the various falls and the state park, I'm thinking it might be time to watch the Hunger Games again and see if I can recognize where any of the scenes were filmed!
Labels: hike; DuPont State Forest