What is in a Cat's Name?

It's amazing how small things can rock your world.  Today I finally dug through the paperwork for Pepper and Dublin so I could update my current contact information for their microchips.  I called 24PetWatch and spoke with a very nice lady named Sabrina.  I gave her Pepper's microchip ID number first and Sabrina started asking me questions about her.  One of the questions she asked was if her name was still Tulip.  I was at a loss for words for a few seconds because I had never heard that name before.

When I adopted Pepper from the Humane Society of Tampa Bay, "Pepper" was the name on all her paperwork.  I knew from her paperwork that she had been adopted previously and returned about year later, supposedly due to allergies.  That sounds like a bit of a cop out to me, but someone returning her was a blessing for me.

I told Sabrina that her name was now Pepper, and the change was made in the 24PetWatch system.  After I hung up the phone, I bent down to look at Pepper, who was napping on one of the dining room table chairs.  I said "Pepper" and got no response.  Then I said "Tulip", and doggone if she didn't raise her head, open her eyes, and look at me!

I've always thought Pepper is a great name for her because her coloring reminds me of a jar of 5-peppercorn blend!  But now I am wondering if I should start calling her "Tulip" since she seems to recognize the name.  I will test name recognition with her a few more times before making a decision, because that could have just been a fluke.

I can't seem to find the right word to describe the way I feel, but the one that comes closest I think is "unsettled".

I think it was T.S. Eliot who talked about a cat having 3 names.  I need to go back and read that poem again, and maybe I'll gain some insight! 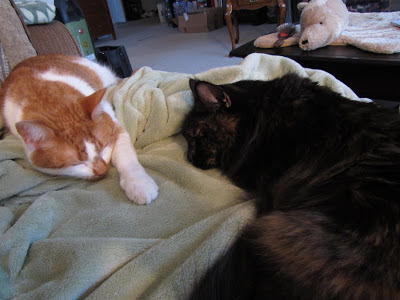