Yesterday my friend Marc at work invited me to join him and Norma (another friend) for a walk before work this morning.  He said it was about 3 miles, and the plan was to walk out to Hains Point and back.  I thought that sounded great.  I have been in an Effective Writing course at work most of this week, and class wasn't schedule to start until 9 AM.  Plenty of time for a walk. 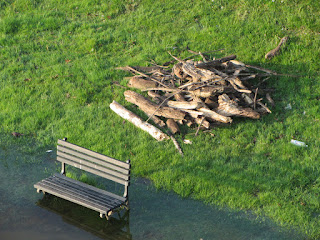 We started out about 7:20 AM.  We walked across the bridge to get to East Potomac Park.  The weather was awesome for walking.  The sun was already on it's way up.  The temperature was a bit brisk, but just perfect for a morning walk.  As we were crossing the bridge, we noticed the water seemed a bit high.
We entered the park and the sidewalk ran right along the water.  There were places where the water was lapping up over the sidewalk, which was in a bit of a state of disrepair in some spots.  As we continued down the sidewalk, we heard a rat-ta-ta-tat, rat-ta-ta-tat.  We looked around and finally saw a woodpecker on top of one of the street lamp posts.  I wondered aloud what was he doing pecking away at a metal post.  Marc's theory was that he was sharpening his beak.  That sounded like a good theory to me! 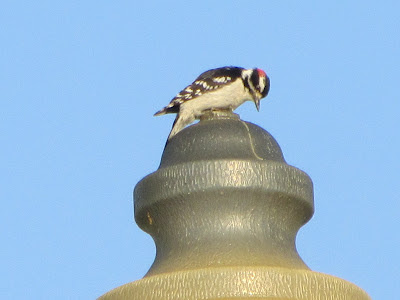 We continued along the sidewalk, passing a few fisherman, and watching the Coast Guard boats out on the water.  As I looked off in the distance, the sidewalk seemed to go on forever!  I would occasionally stop and take a picture or two (I rarely go anywhere without my camera!).  Then I'd jog to catch up to Marc and Norma.  Sometimes we'd see something that would catch all of our eyes, and we'd stop to look a little closer.  We saw a bird that had managed to catch something for breakfast.  We couldn't quite figure out what it was.  A snake, maybe?  Whatever it was, the bird seemed to be having to work pretty hard for it's food! 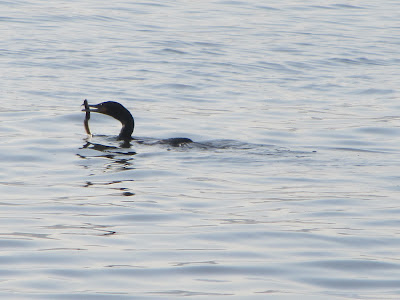 We finally reached the end of the peninsula and made the turn to head back to the office.  Norma had a pedometer with her and would tell us every so often how far we had come.  I was keeping an eye on the time, because it seemed to be taking a bit longer than I had thought it would.  The instructor has been arriving around 8:30 AM, and I had been unlocking the door to the room the class was being held in. 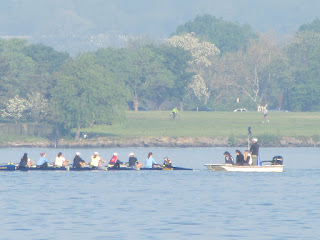 As we continued around the bend, we could see Reagan International Airport and Arlington across the Potomac River.  Planes were taking off from the airport, and a team of rowers was out on the water.  We saw a heron, and lots of other birds and squirrels.  There were bicyclists and several other walkers and joggers.  As we continued the walk, we noticed a potential problem ahead. If you look between Marc and Norma in the picture below, you'll notice that our route was disappearing into the water!  We decided it was time to take the high road!

We're enjoying ourselves and having a grand old time.  Then I realize it's 8:30 AM and we've still got a ways to go.  At about a quarter til, I decide I better phone the office and see if I can catch someone and see if they'd be willing to take the key and unlock the door to the room our class was being held in.  Fortunately, I was able to reach Iris, who said she'd take care of it!

Now that I was no longer a teensy bit stressed about the instructor having to stand in the hallway til I got back, I was able to enjoy the rest of the walk back.  I took a picture of the Jefferson Memorial as we passed it, and if you look closely, you can see the tip of the Washington Monument over the left had side! 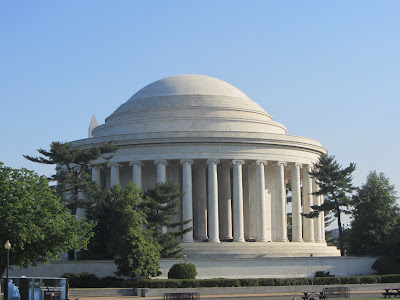 So about an hour and half from the time we started and over 5 miles later, I was back at the office with 5 minutes to spare before class started!  What a great start to the day!
Labels: birds East Potomac Park Hains Point walk