I moved to Asheville in mid-October and quickly came to the conclusion that I could stay here for a while.  And maybe even make Asheville my forever home.

So I met with a buyer's agent and started looking at lots.  I was open to looking at existing homes too, but the only two houses I've been interested in so far went under contract before I could even get there to see them.

This past Friday I drove by several lots I found on Zillow before going to a matinee movie.  I was very intrigued by what I saw.  The street is called Duckett's Grove.

There were four lots with for sale signs, and I was immediately drawn to one in particular.  I called Jon (my agent) and asked him to do some checking on the lots.  Several of the lots I've found that I've looked at so far had covenants that require a minimum square footage home well above what I want to build.  These lots have a 1500 square foot minimum for one story homes.  The first floor plan I did with Stacey at Shumacher Homes over a month ago was 1505 square feet.  That seems like a sign, and a good one at that!

On Monday I met Jon and my friend Karen and her husband Dave at the properties to walk them. It turns out the lot I was most interested in is under contract already to a builder who plans to put up a spec home. None of us cared much for one of the four lots that was nearest the main road. So we walked the two lots, one of which is at the end of  a culdesac. After discussing the pros and cons of each lot, we all agreed that we liked the culdesac lot the best.

Here's a picture I took of the lot while standing in the culdesac.  You can see the side of a white house to the right of the lot.  This would be my only direct neighbor.  The left side of the lot is adjacent to the back of a home on another street. 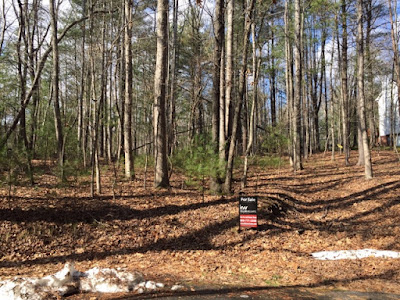 I took this photo standing about where the house would be built.  There's a nice almost flat area that I think would be a good place to put the house. 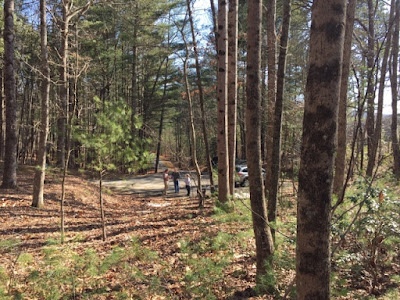 The lot is number 3858.  As you can see in the screen shot below, there is a large parcel of land (about 195 acres) that is directly behind the lot.  If I'm lucky, this land will remain undeveloped till sometime after I'm no longer around. 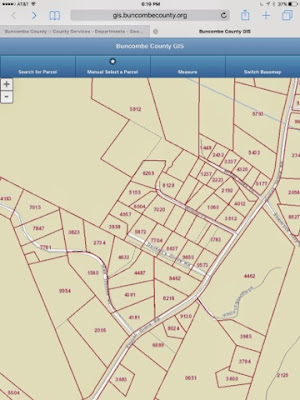 This screen shot is a bird's eye view of the property.  It is in between the white house with the orange pin in front of it and the pool you see behind the house near the bottom left corner. 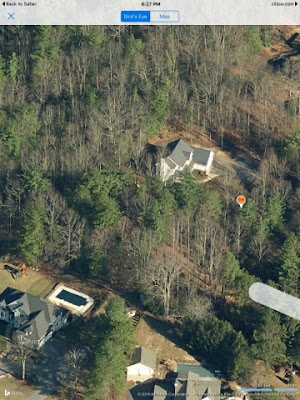 I made an offer on the lot that was about 15% less than the asking price.  I was shocked when my offer was accepted with no counteroffer!  We are now entering a 40 day due diligence period.  I'm meeting with Stacey on Friday afternoon to go back to the drawing board on a floor plan.  I have come to the conclusion that the original floor plan we drew up has quite a bit of wasted space, and the living space is larger than what I want. I have a better idea what I'd like to do now, and am looking forward to our meeting.
Labels: Asheville; house