Post 2 of an unknown number of posts that I'll be making over the next few weeks (OK, actually it's actually months, not weeks!) as I organize and select my favorites of the over 3,000 photos I took while on safari!!!


Going through my safari photos is taking a lot longer than I had thought it would.  I have the best of intentions, but they don't seem to be getting me very far!  Be that as it may, here are the next set of my favorites from my safari!

The second park we visited was Lake Nakuru.  Here's a photo of the lake from our lodge.  As you can see, mini-me Pepper and Dublin tagged along on this trip!  (And no, we did not feed the baboons!) 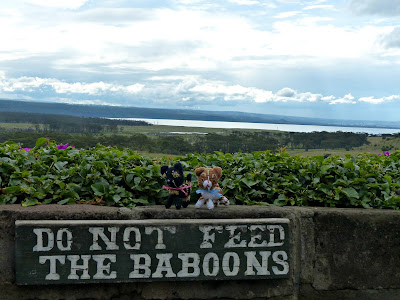 While walking through the lodge grounds, I saw what I thought was a rather unusual bird.  It's called a hoopoe.


But it was not my favorite bird that I saw in the park.  My favorite was by far the lilac-breasted roller. Isn't it beautiful?!?


I also got a pretty good photo an African gray hornbill in a tree.  I was lucky that the group I was with enjoyed the birds as much as I did!  I'm sure not all tour groups were as into birds, but Wally and I in particular were bird crazy!  Fortunately our guide was as well versed on birds as he was the mammals in the park.


During the game drive that afternoon in the park, we saw two male impalas who appeared to be duking it out,  Several baboons, including this mom and a baby, seemed to be as enthralled by the fight as we were!


But for me, the highlight of the drive in Lake Nakuru was seeing two lionesses and their three cubs in a tree!!! 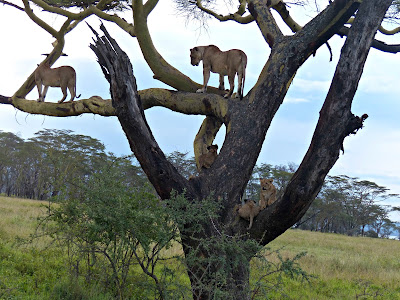 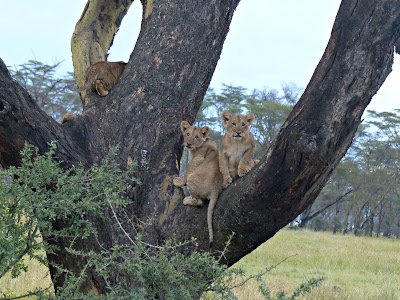 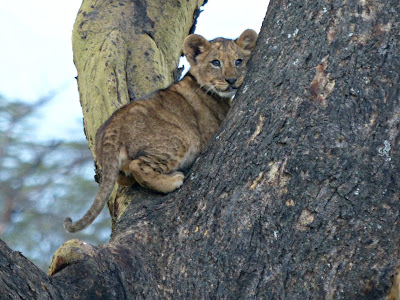 But our guide, Haron, wasn't about to let us leave the park disappointed!  The following morning on our way out of the park, we took an unscheduled game drive and were fortunate enough to see a small herd of southern white rhinoceroses!!!


White rhinos, as you can see, aren't actually white.  Supposedly they got the name through the mistranslation of the Dutch word "wijd", which means "wide" in English.  They were being referred to as "wide mouthed", but ended up being called "white" rhinos. Who knew?!?

So, after visiting two of the seven parks we would visit during our safari, we had already seen the Big Five (cape buffalo, lion, leopard, elephant, and rhino).  So how do you top that???  We were soon to learn that each day seemed to get even better!!!..........

I tell my friends and family that I was so fortunate during my safari.....I saw everything I hoped to see, and animals and birds I never knew existed!!!