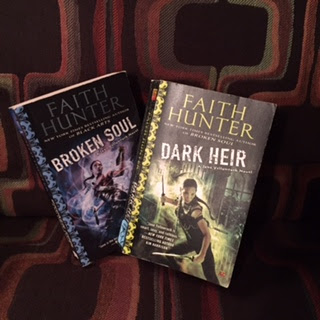 The first two books I finished in 2016 were the most recent in the Faith Hunter Jane Yellowrock series, Broken Soul and Dark Heir.  Jane is a Cherokee skinwalker who is a rogue vampire hunter. "Have Stakes, Will Travel" is her company motto. I like the books because they are firmly rooted in the fantasy genre, my favorite. But they also have an element of mystery thrown in, my second favorite genre, and even a little romance. The books also contain humor that makes me chuckle out loud.

As a skinwalker, Jane is able to change her shape into that of a variety of animals, although a mountain lion is typically her animal of choice. When she was very young, through the accidental use of black magic, she stole the body/soul of a mountain lion who now shares her consciousness.  This mountain lion presence she refers to as her Beast.  Beast is not happy when Jane assumes other forms, although she does acknowledge that at times, other forms have their advantages.  For example, if Jane needs to track a scent, she changes to a bloodhound.  While Beast does not care for dogs, she reluctantly accepts that the dog's sense of smell is even better than her own.

A new book in the series will come out later this year, and it is definitely on my list of Books To Read.