Yesterday I flew south to Tampa for my first visit since I moved to the DC area in November 2011.  It's really neat to be back and see some of my old stomping grounds!  My flight was delayed, but that and the rain in Arlington as we were finally taking off didn't damper my spirits!  I was able to snap a couple of pictures of the Pentagon as we flew over. 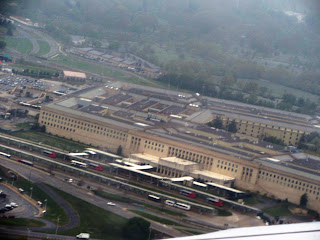 Alexia picked me up at the airport and we headed for Samarai Blue for sushi.  I still haven't managed to find a great sushi place where I live now, so having a caterpillar role was a huge treat.  After sushi we drove by my old house, which looked pretty much the same except for the new mailbox out front.  Then we decided to do a little shopping.  About an hour later, I had added three dresses to my wardrobe!  I told Alexia she is my good luck charm because I have better luck finding clothes when she's with me!

Before we went home, we went to J.J. Gandy's in Palm Harbor to pick up a key lime pie. Theirs are the absolute best!  Alexia saw a peanut butter pie that caught her eye, and we couldn't resist getting a cupcake popper a piece too!

We made a Publix run a little later (I sure wish Publix would move north to where I live now), then settled in to watch The Hunger Games.  I've read the books, but hadn't seen the movie.  I thought they did a pretty good job with it. I definitely want to see the next one, and it's left me with a bit of a hankering to re-read the books.  I read them quite some time ago, and don't remember a whole lot.

I think we're going to head to the Lowry Park Zoo today, and we have happy hour planned with some friends after they get off work (it sure is nice to be on vacation!).
Labels: Tampa trip