This morning I decided to visit the nearby Del Ray neighborhood and their year round farmer's market.  It was rather on the small side, but there was a pretty good variety of food for sale.  There were several bakeries represented, a butcher with fresh meat, and a vegetable stand.  The only thing I bought was a raspberry scone, which was good but not exceptional.

After visiting the farmer's market, I walked up and down the Del Ray main street and stopped into a shop called Cheesetique.  They had more kinds of cheeses than I've ever seen in one place before!  I started reading the little tags on each of the cheeses, but finally got overwhelmed and asked one of the nice guys working there what would be good with a sliced up apple (apple and cheese is one of my favorite snacks!).  He suggested a sharper cheese, and gave me a taste of a type of gouda.  It was really good so I decided to get half a pound.  While he was cutting and wrapping up the gouda for me, I saw a cheese called Honey Goat that in the description said is good on a bagel or toast.  I decided to get some of it too.  The guy presented me with two nicely wrapped packages of the cheese.  I thought it was really cool the way the cheese is packaged.  It tells you the type of cheese, the country it comes from, and whether it comes from a cow, a sheep, or a goat! 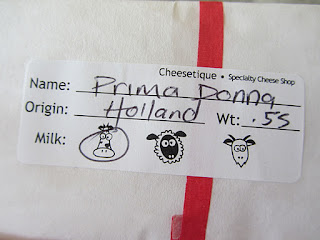 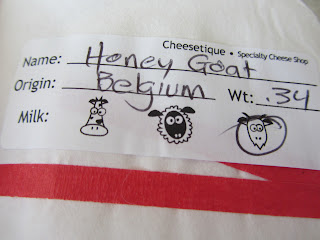