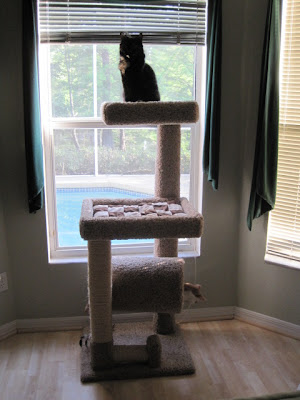 The cats and I all had fun playing with our new toys this weekend.  The cats are enjoying their new "cat tree".  Pepper is playing the part of the queen regally sitting on the top perch.  Dublin is hanging out in the round perch keeping his eyes on the cord that controls the window blinds.
Also, I have finally managed to find a moist food that Her Highness doesn't consider beneath her dignity to eat.  My local vet told me that the optimum diet for a cat is 2 3-ounce cans of moist food a day.  Free feeding dry food was no longer an option, as Dublin was starting to get a bit on the tubby side.  After spending 5 weeks trying a wide varierty of moist foods (and trying to stick with the ones that don't start out with some type of by-product as one of the first 4 ingredients), Fussie Cat is the winner!  How appropo!
﻿﻿﻿﻿
﻿﻿﻿﻿﻿﻿ 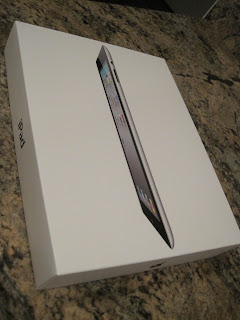 ﻿﻿﻿﻿As for me, I visited Best Buy with my friend Alexia on Friday.  While she was looking for a CD she wanted, I decided to go to the computer section and see if they had the iPad 2 model I've had my eye on for a while in stock.  ﻿And what do you know....they did!  I had called the local Apple store a time or two to see if they had the one I wanted in stock, but they never did. So I ordered the one I wanted from the Apple on-line store back on April 10th and was told to expect delivery on May 4th.  I am NOT one to spend hours standing in line to buy a gadget!  But I just couldn't pass up getting it since I was there, the one I wanted was there, and there was no one in line!  So I cancelled my online order and this weekend spent some time downloading a few apps (just free ones so far, but I'm open to suggestions!).  I signed up for 3G service and visited my local library and tried out the Wifi capabilities.  ﻿﻿
﻿﻿
﻿﻿
Labels: cats