﻿﻿﻿﻿﻿﻿﻿﻿Yesterday was a fun-filled day with the family!  We began the morning by finding a local car wash so we could get mom's Mountaineer cleaned up from the drive up from North Carolina.  It had been snowing when they left home, and by the time they made it to Virgina, there was so much dirt and debris caked on the windows that I'm not sure how Sid could even see out to drive!  After taking care of business, then it was off to play!  We visited the National Museum of the American Indian (http://nmai.si.edu/).


We spent several hours exploring the museum, and saw the beginning of an Indian dance show.  Some of the costumes were very elaborate. 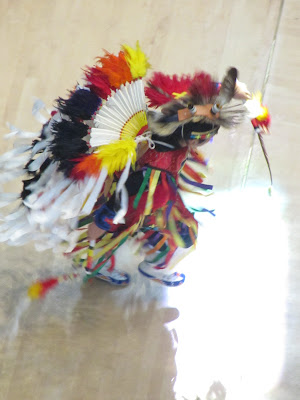 After leaving the museum, we did a little window shopping, then went to Outback Steakhouse for an early dinner.  The restaurant ended up being right around the corner from where Sid's aunt Goldie used to live in Alexandria, so after dinner, we drove down the street where she used to live many years ago.

By then we were all worn out and decided we were ready to be homeward bound!  We watched the New York Giants/Green Bay football game.  I REALLY enjoyed the first half, but then it turned into a bit of a route and I lost interest.  I prefer the "sit on the edge of your seat" close games myself (but only if the team I'm pulling for wins, of course!).

Earlier in the day we had called my aunt Della Faye for her no bake cookie recipe.  Ironically, she said she got the recipe from me back when I was still in either elementary or junior high school!  So while the parents watched the 2nd half of the football game, I made cookies!  The cookies weren't as good as my aunt's (they obviously didn't have her TLC included!), but I thought they turned out pretty darn good! 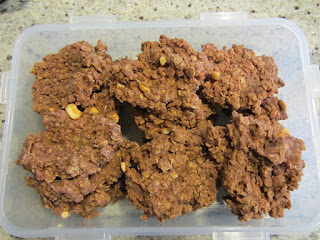