• Grab your current read• Open to a random page• Share two (2) “teaser” sentences from somewhere on that page• BE CAREFUL NOT TO INCLUDE SPOILERS! (make sure that what you share doesn’t give too much away! You don’t want to ruin the book for others!)• Share the title & author, too, so that other TT participants can add the book to their TBR Lists if they like your teasers.
My teaser for today:
"Only a few people were out and about, and theirs was the only wagon.  The further they drove from the depot the more she began to question her decision to throw her lot in with Shai so quickly, especially since the only thing she actually knew about him was that he worked for the person who might be responsible for spiriting away her countrymen -- and doing whatever had put at least one of them in a pine box."

p. 87, "Vermilion" by Molly Tanzer
I've been meaning to get to this book for quite some time.  The book is planted firmly in the two genres I prefer the most, mystery and syfy/fantasy.  And it was written by my cousin (by marriage -  her uncle married my aunt!). We haven't met, but I hope someday we will!
I was struggling to come up with an overview of the book that would do it justice, and finally gave up and pulled the blurb from Google books:

Gunslinging, chain smoking, Stetson-wearing Taoist psychopomp, Elouise "Lou" Merriwether might not be a normal 19-year-old, but she's too busy keeping San Francisco safe from ghosts, shades, and geung si to care much about that. It's an important job, though most folks consider it downright spooky. Some have even accused Lou of being more comfortable with the dead than the living, and, well... they're not wrong. When Lou hears that a bunch of Chinatown boys have gone missing somewhere deep in the Colorado Rockies she decides to saddle up and head into the wilderness to investigate. Lou fears her particular talents make her better suited to help placate their spirits than ensure they get home alive, but it's the right thing to do, and she's the only one willing to do it. On the road to a mysterious sanatorium known as Fountain of Youth, Lou will encounter bears, desperate men, a very undead villain, and even stranger challenges. Lou will need every one of her talents and a whole lot of luck to make it home alive... From British Fantasy Award nominee Molly Tanzer comes debut novel Vermilion, a spirited weird Western adventure that puts the punk back into steampunk.

I couldn't have put it better myself!!!  I will sheepishly admit I had to look up the definition of steampunk.  For those word challenged like me, steampunk is a subgenre of science fiction/fantasy that incorporates technology and aesthetic designs inspired by 19th century industrial stream-powered machinery.  So there you have it! 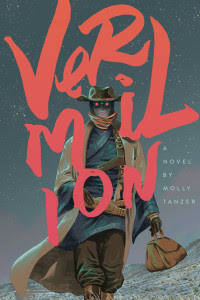