Well, I won't be building a house quite yet, if at all.  The last week has been one disappointment after the other on that front, I'm afraid.  The site costs to build on the lot I blogged about earlier were higher than I felt comfortable paying.  Over 115K for the land and site prep, when the house itself is only about 200K.  I just couldn't see spending more than a third of the total cost of the home on the land and the site prep.  I also wasn't convinced the house would appraise high enough for me to get a loan to build.  And even it if did, I wasn't comfortable paying $195 a square foot for a house (new construction comps in the area are $180 a square foot).

So, I backed out of the deal.  Unfortunately, it was several days past our due diligence period had expired, so I lost the 2K earnest money I put down for the lot.  I can understand why the owner would not return the money.  It said they didn't have to in the contract and they had taken the lot off the market because I had a contract on it.  That doesn't make it any more palatable.  And I still have to pay the attorney who was set to handle the closing (fortunately not as much as I would have if we had closed).  One other small bright spot is that I'll be able to get a partial refund for the septic inspection and permit I paid for, since I won't be building the house.

I'm chalking it up to an expensive lesson learned.  Going forward, I won't offer to pay cash for land like I did in this instance.  I'll make it contingent on being able to get a loan.  And I won't make an offer until I know what the site costs will be.

So...I'm back to looking at land, and also keeping the option open of purchasing an existing home. Friday I found a house I wanted to see, but it went under contract before my realtor was even able to get me in to see it.  I've had this happen two other times with homes I wanted to visit.

As you might can imagine, I'm more than a bit discouraged by the entire process.  I haven't comletely given up, but I'm going to take a step back and leave the ball in my realtor's court.  I found the land and two of the houses I wanted to look at that went under contract before I saw them.  Right now....I'm tired of the putting effort into the process.  So, a break it is.

I am fortunate that I am mostly happy with being a renter.  I miss having a garage and more direct sun light.  But the kids do get their sun puddles in the afternoons, even if we don't get much direct sun in the main living area of the apartment.  My friend Alexia sent them mousies as a gift, and both Pepper and Dublin  have been enjoying playing with them. 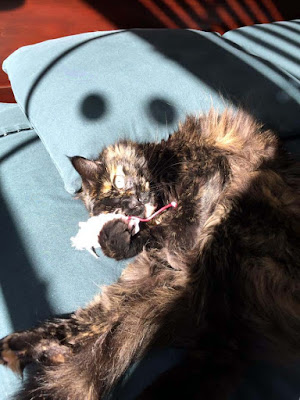 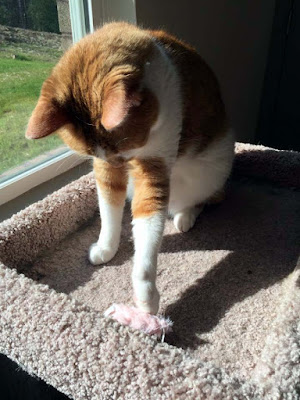 Watching them makes me realize how lucky we are.  Life is typically simple, and people make it a lot more complicated than it needs to be.  And I remind myself that before I moved to Asheville I was a big advocate for renting over buying.  And had even gone so far as to say I'm not sure I'd ever buy a house again.  There is significant less commitment with renting and if something goes wrong, I can simply submit an online maintenance request and typically within 24 hours, the issue is resolved at no additional cost to me.  I may not be building equity in a property, but I also don't have to pay the costs associated with the upkeep.  Once a house is paid off, there are still homeowner's insurance and property taxes to pay, along with time, effort, and money to maintain a yard and the house itself.  If I keep this up, I'll talk myself out of looking at land or houses completely!

I plan to continue hiking and exploring around my new home...and time will tell what the future will bring!
Labels: Asheville; house