• Grab your current read• Open to a random page• Share two (2) “teaser” sentences from somewhere on that page• BE CAREFUL NOT TO INCLUDE SPOILERS! (make sure that what you share doesn’t give too much away! You don’t want to ruin the book for others!)• Share the title & author, too, so that other TT participants can add the book to their TBR Lists if they like your teasers.
My teaser for today:
"Sometimes in the middle of the conversation, there would be a switch, and instead of talking to my friend Warren or my husband Adam, I was talking to someone a little more direct, someone who could eat little coyotes for breakfast.  So I was used to it, but I'd never seem something...someone so dark and violent in the man I thought of as a kid brother, a guy who was a little bit of a clown to cover up just how competent he was."

p. 123, "Fire Touched" by Patricia Briggs
This is the latest novel (just released this month!) of the Mercy Thompson series.  Shapeshifters, werewolves, the fae......not sure how it can get much better than that! 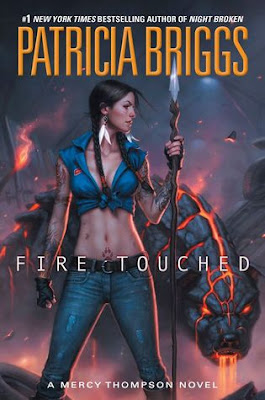