Today is the 2-year anniversary of the day I adopted Pepper and Dublin from the Humane Society of Tampa Bay.  I still remember the day.  It was during the week and I was at work.  At lunch time, I decided to go by the Humane Society, where I had thought about going many times before, but had never quite made it there. I was just going to stop by and take a look around.  That's all.  By the time I headed back to the office, I had committed to returning after work to pick up 2 cats that stole my heart while I was there.

Dublin had an outgoing personality from the very beginning.  He was rubbing his head up against the bars of the cage and very friendly.  Part of the reason I was drawn to him was because it was the day before St. Patrick's Day and in 2009 I had spent St. Patrick's Day in Ireland.  I took that as some sort of sign! He had been transferred to the Humane Society from some other shelter, but I never learned which one. 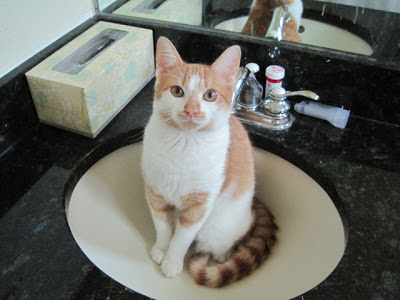 Pepper was a bit more reserved.  But I remember her hanging out on the side of her cage that had glass instead of bars between us.  She was butting her head up against the side of the glass like she wanted to be petted, but wasn't overly sure about it.  Pepper had been adopted by someone from the Humane Society about a year prior, but had been returned, supposedly due to allergies.  As I'm reading her paperwork, I'm thinking to myself, if I had a family member that was/turned allergic, they'd either get shots, take pills, or find some other place to live. 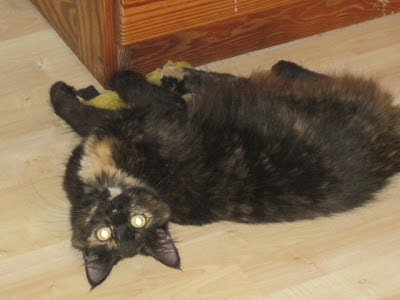 I took each of them back to a room where you can visit and interact.  First I met with each one separately, then asked if they could both be in the room with me since I wanted to adopt two at the same time.  Dublin was definitely the more adventuresome of the two, and when he got close to Pepper, she hissed at him.  I thought to myself, if I adopt these two, she will be the alpha cat!  It didn't quite turn out the way I thought considering Dublin likes to pick on Pepper and often chases her and jumps on her and makes her squeal like a banshee.  But I digress!

Both were listed in their paperwork as being about 2 years old.  When I had been thinking about the prospect of adopting another cat (or cats!), I had thought I would adopt older cats since I figured it would be easier for kittens to find a good home.  Later, I learned Dublin was more likely about 6 months old, but by that time, I was hooked, he was mine, and there was no turning back!

The last 2 years have been awesome hanging out with them.  Dublin is still his exuberant, outgoing, everyone is my friend, goofy self.  Pepper is still rather reserved, but I am seeing her chasing Dublin more frequently, which never ceases to make me chuckle out loud and say, "You go, girl!"  My favorite times are when they both curl up on the couch with me while I am reading or watching TV, like they did last night while I was watching a new episode of Grimm.  At times like that I think to myself, life just couldn't get much better! 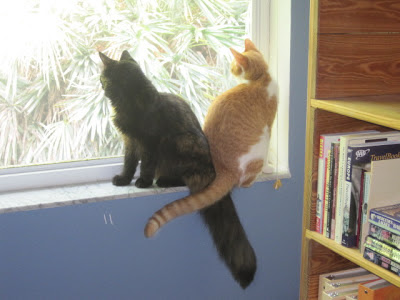