Well, I made my decision on which camera to get today.  I ultimately decided on the Canon SX230 HS.  I went to Best Buy to check out the two cameras I had narrowed it down to, the Nikon Coolpix S9100 and the Canon.  Of the two, I liked the feel of the Canon better and the look of the pictures I took with the cameras while in the store.  While I was there, two Sony representatives made a pitch for their camera, the Sony Cybershot HX9.  I went back and did more research online.  Even though the Nikon and the Sony offered a 25mm and 24mm focal length respectively on the low end and the Canon only offered 28mm, I wasn't convinced that would make a difference in the kind 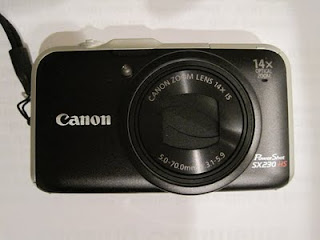 of photos I anticipate taking.  I guess when you get down to it, I am a Canon girl at heart!  I'm not sure I could have made a "wrong" choice between the three cameras.  Even the Sony rep said he thought I'd be happy with whichever I chose.  One of the biggest factors affecting my decision was based on the overall reviews I read from muliple sources.  Even though some editor or "expert" reviews ranked the Sony or the Nikon higher, the user reviews overwhelming indicated the Canon users were happiest with their purchase.  Now I get to play with my new camera and get a good feel for it and what it can do before going to London next month!
Labels: camera