Post 1 of an unknown number that I'll be making over the next few weeks as I organize and select my favorites of the over 3,000 photos I took while on safari!!!

I recently got back home from a 2-week safari in East Africa.  I spent one week in Kenya, and one week in Tanzania.  I've wanted to do a wildlife safari from as far back as I can remember. But I never had a combination of the time, money, and the knowledge of how to plan one at the same time.

Last year a friend who has been on a safari recommended the company she and her husband used, Safari Ventures, located in Tampa, Florida to me.  Last year I also retired....and I had the money saved to make the trip.  The stars had finally aligned, so I booked the trip.

It was everything I hoped for and more.  I saw all the animals I hoped to see, and animals and birds I never even knew existed!  And bonus points for me, made several new friends while on the trip!

I arrived in Nairobi, Kenya around 10:30 pm on a Sunday and was met by a driver who took me to my hotel for the night.  It was an eye opener to arrive at the hotel and have to stop and show my passport to the guards at the gate to the fence that surrounded the hotel property.  I definitely wasn't in Kansas anymore!

After a good, but short night's sleep, on Monday morning I met the rest of the people that I'd be spending the week in Kenya with.  There were a total of five of us...me, a couple from California, and a mother and daughter from the UK.  We met our driver/guide, Haron, who would be with us the entire time we were in Kenya.

We loaded our bags, and headed off for Masai Mara, a large game reserve that abuts the Serengeti in Tanzania.  Our first stop was an overlook of the rift valley. 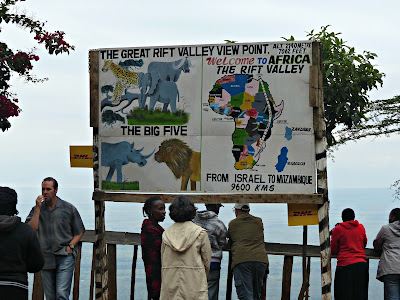 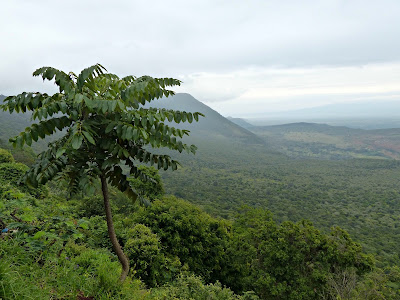 It was here that we saw the first of what would be more species of wildlife than I ever imagined. There were several rock hyrax hanging out in a tree a little ways down the escarpment.  This guy seemed to be looking right at us!

After our stop, we continued down the escarpment and spent a good part of the day on the drive to the park.  We learned what an "African massage" is....it's what you get on the extremely bumpy roads that make up a large part of the routes we had to take to get to the parks.  Haron seemed to drive faster on the bumpy dirt roads than he did on the paved ones!  Maybe that's partly because there were cows, and goats, and donkeys all along the sides of the paved roads.  I found it amazing that we didn't see domesticated animals getting hit considering the number that seemed to roam freely right beside the roads.  We did occasionally have to wait for some critters to get out of our way, both on the paved and dirt roads. 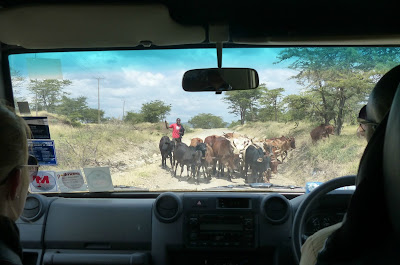 At one of the rest stops we made on the way, we were introduced to what we would learn is an EXTREMELY common bird, the superb starling.  They seemed to be as numerous as pigeons in Central Park in New York, but were a whole lot prettier!

As we entered Masia Mara, we starting seeing wildlife before we even made it to our lodge! Thankfully we had several pairs of eagle eyes in our vehicle.  We spotted this elephant who meandered closer to us as we stopped to take its picture.

The first of the Big Five marked off our list already!  The Big Five are elephants, cape buffalo, lions, leopards, and rhinoceros.  Soon we arrived at Keekorok Lodge, where we'd be staying for the next two nights.  Here's a view of my room from the outside.  Pretty sweet, eh?!? 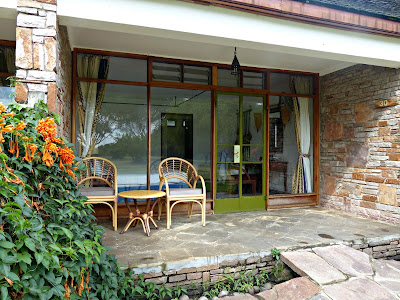 After getting settled in, we spent the majority of our time in the park during daylight hours on game drives.  We saw three more of the Big Five, and we were still in the first park we would be visiting during our 2-week adventure!  Needless to say we were thrilled!

Even though the leopard didn't make a move on the zebras and the wildebeests, they seemed to decide it was time to move on.  It was like seeing a mini-migration! 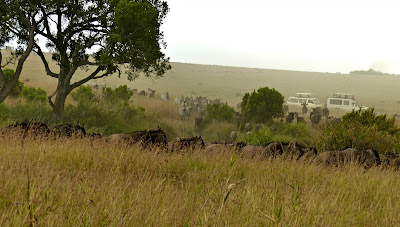 We continued to see many species that we hadn't seen yet, both predator and prey.

And it wasn't just more mammals we saw.  There were so many beautiful birds!


One evening we visited a Maasai village.  The men of the village performed a traditional dance for us, and we were given a tour of the village.  They showed us how they start fires by literally rubbing two sticks together.  We also got to see the inside of one of their homes.


Over the course of our week in Kenya, we came to learn that Haron, our guide, was a great driver. We hadn't quite got to that point when we crossed this bridge!  I kept my eyes mostly closed!  The roads were definitely challenging at times, and we had to watch out for holes and all kinds of critters that obviously felt they had the right-of-way! 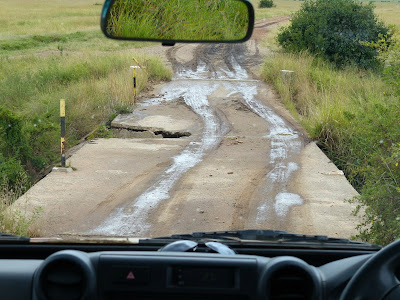