• Grab your current read• Open to a random page• Share two (2) “teaser” sentences from somewhere on that page• BE CAREFUL NOT TO INCLUDE SPOILERS! (make sure that what you share doesn’t give too much away! You don’t want to ruin the book for others!)• Share the title & author, too, so that other TT participants can add the book to their TBR Lists if they like your teasers. 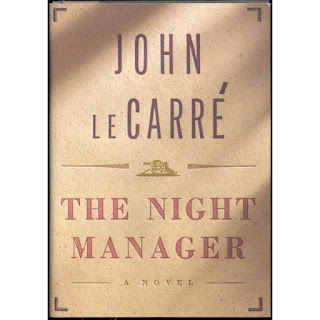 My teaser for today isn't random like it typically is.  Instead I wanted to set the scene with the opening lines from the book:
"On a snow-swept January evening of 1991, Jonathan Pine, the English night manager of the Hotel Meister Palace in Zurich, forsook his office behind the reception desk and, in the grip of feelings he had not known before, took his position in the lobby as a prelude to extending his hotel's welcome to a distinguished late arrival. The Gulf war had just begun."

p. 3, "The Night Manager" by John le Carre
I'm hooked on the 6-part miniseries currently on AMC starring Tom Hiddleston (think Loki from Thor and The Avengers movies!).  After starting to watch the series, I learned it's based on a book by John le Carre.  So guess what book I'm starting today!!!  The first two episodes have aired in the US, with episode three being tonight at 10. My experience has been that books are usually much better than TV shows or movies based on the books, so I have high hopes for this one!
Here's a trailer for the show in case you are interested!