Yesterday afternoon I drove from Arlington to visit mom and Sid in West Jefferson, North Carolina.  I stopped for a quick picture as I approached the state line! 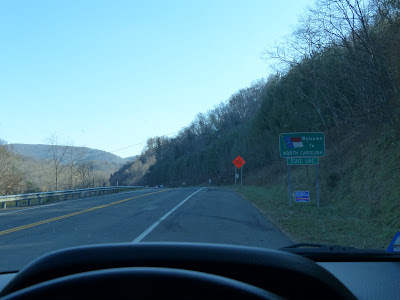 Every time I make the drive and enter the winding roads on North Carolina, I always have a sense of coming home.  I've been thinking a lot about where I want to live after I retire.  I tend to think of North Carolina as a "been there, done that" state, just like Florida, where I used to live before moving to Virginia.  Maybe I need to rethink that.

After arriving at mom and Sid's I spent some time gazing out the windows looking for interesting critters.  I saw some chipmunks, but by the time I got my camera, they had vanished.  I did get a picture of one of the many squirrels that hang out near the house.  That might have something to do with the fact that mom puts corn out for them! 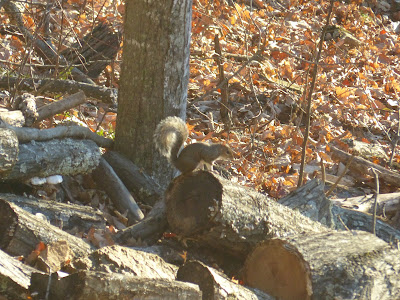 I was disappointed that I didn't see any deer.  I got up this morning about 6:45 and puttered downstairs.  I tend to head straight for the windows, and this time I hit paydirt!  I saw my first deer.  She might not have been looking at me as I was looking at her, but it sure looked like it!  I waved anyway, just in case, to be polite. 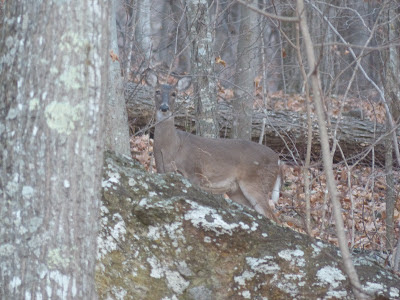 I thought it was a bit unusual, because usually where you see one, you see more.  But she was either on her own this morning, or was at the tail end of a bunch that had already meandered up the mountain.  Deer do tend to blend into the background, but the nice thing about it being fall with most of the leaves having fallen off the trees already, it makes it easy to them when they move!
Labels: North Carolina visit; squirrel; deer